You’d never think wearing bloomers would get you anywhere.

I had the best worst job for two summers of university. I was a role player and a tour guide at the Ukrainian Cultural Heritage Village. What does that entail and how was it both the best and the worst? 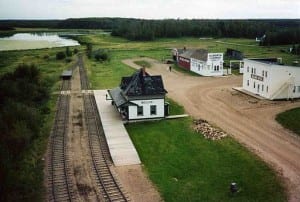 First, a bit of dirt on “The Village”. For those that haven’t spent time at The Village, it is a living history museum just east of Edmonton on Highway 16 that recreates the lives of Ukrainian settlers in East Central Alberta from 1899 to 1930. The buildings on site are real – transported from small Alberta towns and restored to the particular year in which they are interpreted. The characters portrayed in the homes and stores on site (by students like me) are accurate interpretations of the real people who lived and worked there and settled this part of our province. Visit these character’s homes or shops and they will answer questions as if it was the year their building portrays. At The Village, you never acknowledge you are working at a museum.

During my Village years, I played two characters. Some days I was Susie, the housekeeper at the Bellis train station in 1928, and on other days, I was Mrs. Demchuk, the blacksmith’s wife, interpreting her life as if it was 1929. I had to read dossiers on Susie and Mrs. Demchuk to learn about them and their 1920-something lives so that I could accurately bring them to life each day.

So how was it the worst job?  For the record, I completely understand there are worse summer gigs. The challenge for me was that all of my friends had high paying, Monday to Friday, low responsibility jobs with high profile companies. They had resume eye catchers, or so I thought. 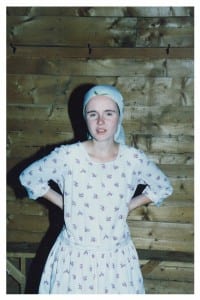 When you are 18 years old, you can’t see the intrinsic value of wearing a floral Ukrainian kerchief on your head, thick stockings and a garter, bloomers (which looked NOTHING like the ones in the lead photo of this post) and chunky, vintage retro heels that I’m sure today someone would think were hipster cool. It was hard to see the long term benefits of working most weekends and making $7.50/hour when all of your friends made $14.  It made me weary to get asked by tourists every 11 minutes where your television was and responding with fake curiosity and my fake Ukrainian accent, “What is this TV you talk about?”

I had no idea. I was looking at it all wrong

Today, with my own history under my belt, I see that the Village was the best summer job anyone could have. It taught me life lessons that I carry with me still today, and gave me skills that advanced me personally and professionally.

I learned you can wear no make-up, never show your hair and dress like a peasant, and men will still think you are hot. The Village was a college-age meat market with forty or more 18-24 year olds. Believe me, we did not look our best (which my lovely Village portrait attests to). But we all managed to see past the settler-style garb, develop Village crushes and only occasionally find unrequited love.

I learned how to think on my feet and speak in public. When you’re Mrs. Demchuk and you get asked again and again where you and your husband Mr. Demchuk got it on in their miniature two room house with their 8-year old son Billy always nearby, you quickly learn the art of deflection and grace. When you have to open up to large groups of tourists and bring a perspective and era to life, you learn the art of being on stage and projecting your voice. When you are asked questions about how difficult your life is as a Ukrainian settler and you had to respond with sincerity, you learn the art of living and speaking in the moment.

I learned everyone likes to hear a story and everyone has a story to tell. Back in 1928, did Susie the housekeeper ever think her life was significant enough to end up one day having people recreate her life in a museum? She just cleaned, took care of the train station master’s three children and made doughnuts every Saturday. But she was a part of something bigger, and as a result, she had a unique story to tell.

Just as we all do.

The Village is a part of my story. And not just because it was the only time in my life I’ve been married (I had three different husbands, no less). This humbling, low-paying job didn’t prevent me from getting student loans, but it left me with confidence, poise and perspective. It gave me the ability to tell a story. It taught me that each one of us has a story to tell, no matter how mundane, quiet or seemingly uninteresting our lives appear to be in this moment in time. Those are all things you can’t find folding t-shirts or pushing a lawnmower.

To the university students just about to hit the job market. To the interns about to descend into downtown cubicles. To the high school kids that will pick up their employment leftovers in July. Will your summer job be about making the most money, working for a high profile corporation, or having weekends off? Or will your summer job become a part of your story?